The Creator Economy has seen a dramatic increase in the past few years. More than 50 million individuals around the world are now considered creators of content and the market has risen to over $104 billion. Our most current Creator Earnings: Benchmark Report We estimated that the overall Creator Economy value to be about $104.2 billion, which is on par with a significant growth rate comparable to that of those of Gig Economy.

Investors contributed $1.3 billions more of venture capital to the influencer marketing Economy in 2021, signalling that they have confidence in the market. 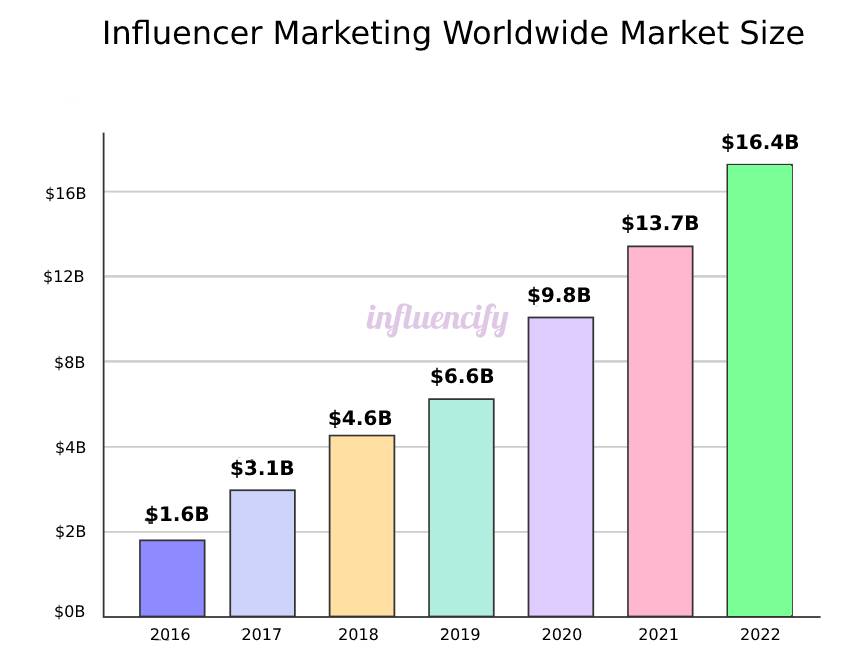 2. Instagram is the top social media platform for influencer marketing

While Instagram was able to see a slight decline in its use in the year 2020, it saw a surge in popularity in 2021 with most brands selecting Instagram as their preferred platform for influencer advertising campaigns, even though having fewer monthly active users (1.3 billion) than Facebook which is among of the top channels, with (2.89 billion) monthly active users. 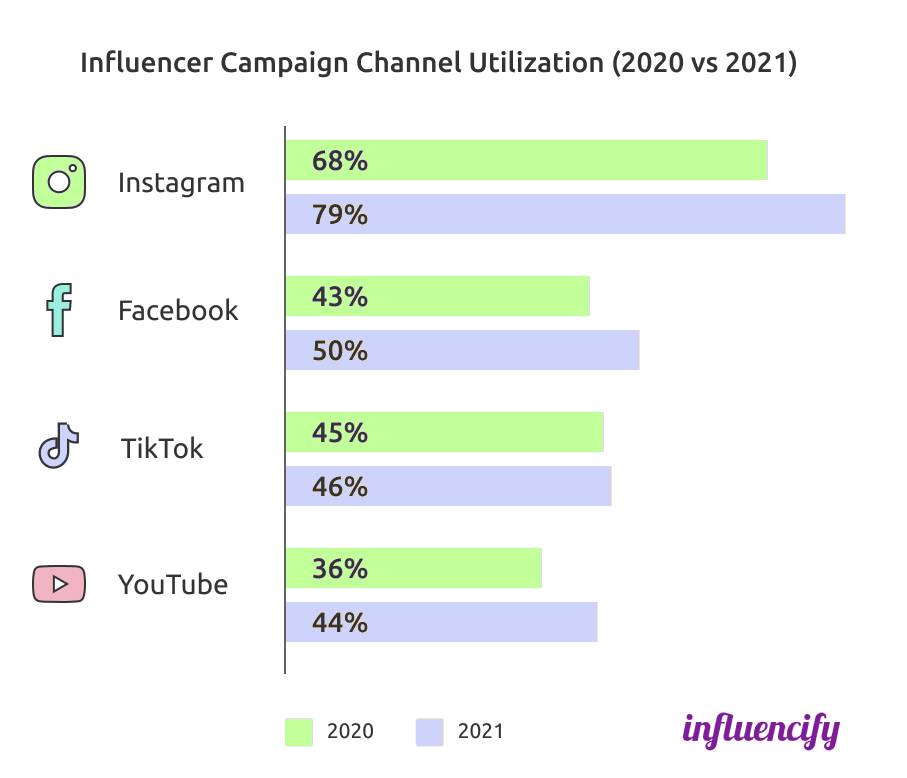 Seventy-nine percent of marketing professionals are weighing Instagram for an important component of their strategies and campaigns, it’s no wonder that in 2022 it’s still an effective sources of lead. The platform is already a versatile one with an international reach as well as 83% users use it in search of something new. After viewing posts with details about products through the site, 87% of users took some specific action, for example, following a brand, going to its store in retail and making a purchase.

The most popular segment in which Instagram influencers published in 2021 and 2020 was lifestyle. This shouldn’t come as a shock when you think about the influencers who are best well-known to the majority of people. Additionally, lifestyle is a great area to share beautiful, vibrant photos.

The second-placed beauty category is very visual, which makes it an ideal topic to post on Instagram. When you think about the Instagram’s primary user base of women between 25 and 34 it’s not surprise that beauty bloggers would be popular on the site.

4. Zara was the highest talked about brand on Instagram in 2021.

With a massive reach of more than 2 billion and more than 300,00 mentions Zara became the highest talked about name in 2021 on Instagram in 2021. This was more than Instagram itself. 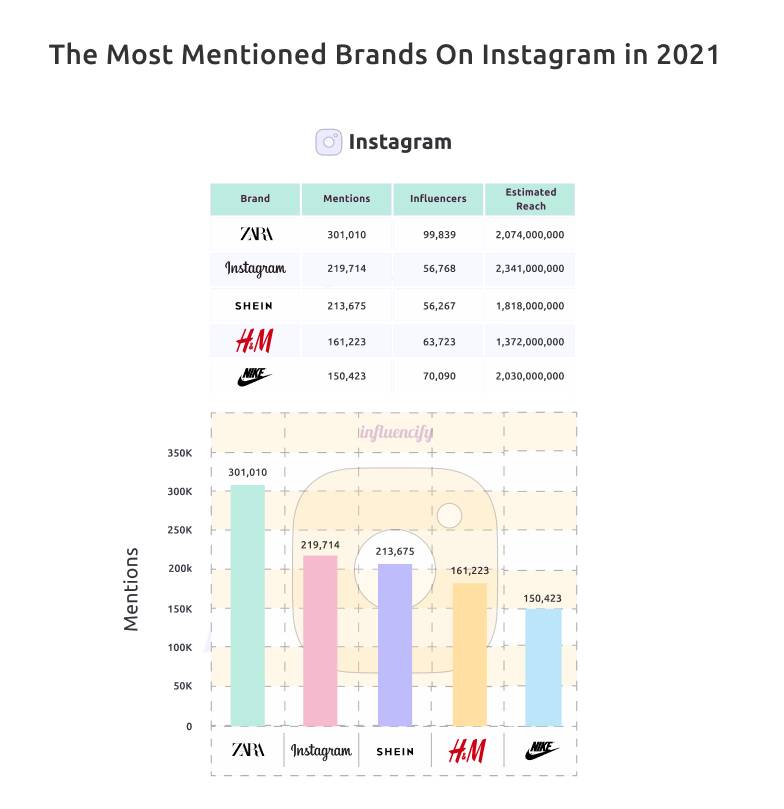 5. Instagram’s influencer fraud is on the decline

In the past there was an influencer-related fraud issue that was a topic of debate. In fact there was a chance that influencer fraud could halt the still emerging business in its tracks.

Since then, numerous instruments and systems have been designed to detect fraud by influencers. This has meant that the proportion of influencer accounts affected by fraud has dropped all over the board, currently less than 50 percent.

According to the information here that, it’s still a concern for a lot of influencers. It is recommended that brands use the tools that can verify authenticity of influencers when seeking appropriate influencers.

It is vital to note that, despite all of this being categorized as “influencer fraud” often those who influencers are actually the victims and rather than the culprits. In this study, we define “influencers who are impacted with fraudulent activity” as Instagram accounts with more than 1000 followers, with abnormal growth or unauthentic interaction (comments and likes made by bots or giveaway comments, as well as commenting on Pods’ posts, etc.) However, not all influencers affected by fraud do it on the basis of fraud. In the on average 49.23 per cent of the influencers worldwide are affected by fraud. (Source: Influencify)

Anyone who has a connection with the younger generation will recognize this figure. TikTok has been able to take Generation Z with a storm. Therefore, if you’re looking to reach out at Gen Z (females at least) You should be looking for TikTok influencers to collaborate. However If you’re selling directly to Baby Boomers from Generation X, you can easily decide to give TikTok the benefit of the doubt.

7. The top 3 interests for TikTok users are music, food, and video games.

8. Netflix was by far the highest frequently mentioned brand on TikTok in 2021.

TikTok also witnessed an interesting cross-branding trend in 2021. Video streaming platform, Netflix, was the most popular brand on the short-form video platform TikTok. If people weren’t streaming videos on Netflix they were talking and creating videos of what they were streaming on TikTok. Disney was also among the top 10 most popular brands on TikTok and so was CBS News. Who said that TV watching was dead and that the young people don’t have an interest in news?

In addition, one of the most watched and talked about channels available on TikTok included Barstool Sports. Barstool Sports is a sports and pop culture blog, which covers the latest news of the day and viral content through videos, blogs and podcasts. 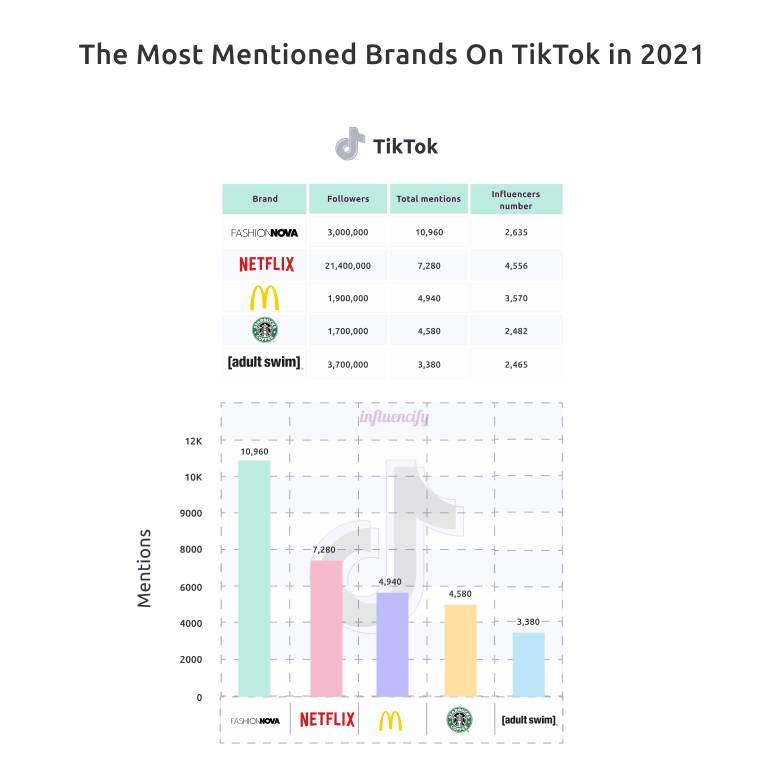 Although many social networks have seen a steady decline of organic engagement posts in recent times (apart from an Covid small blip at the end of the year 2020), TikTok has only had a slight drop. The most important thing is that the rate of engagement of TikTok influencers is very high regardless of size.

Maybe this is due to the effectiveness of TikTok’s algorithm for directing content that is in line with the preferences of its followers. TikTok could be strategically focusing the content of its most popular influencers in its viewers’ For You feeds.

9. Steam was among the top frequently mentioned brand on YouTube in 2021.

Like you’d imagine from YouTube the channels that have the most views or mentions are related to shopping or gaming. Not surprisingly, Steam was the most popular, with more than 76,000 mentions as well as more than 1.1 billion viewings.

The YouTube channels that receive the highest number of views and mentions have a connection to either the gaming industry (Steam, PlayStation, Microsoft Roblox, Microsoft, Roblox, and Roblox) and buying (AliExpress, Flipkart, Shein along with Etsy). While the majority of the 10,000 channels linked with Steam aren’t directly linked with Steam, they are all related to Steam platforms, the channels are able to cover games you can buy through Steam’s Steam store. In the same way, channels dedicated specifically to PlayStation as well as Microsoft are likely to be channel specific to games that run on these platforms. 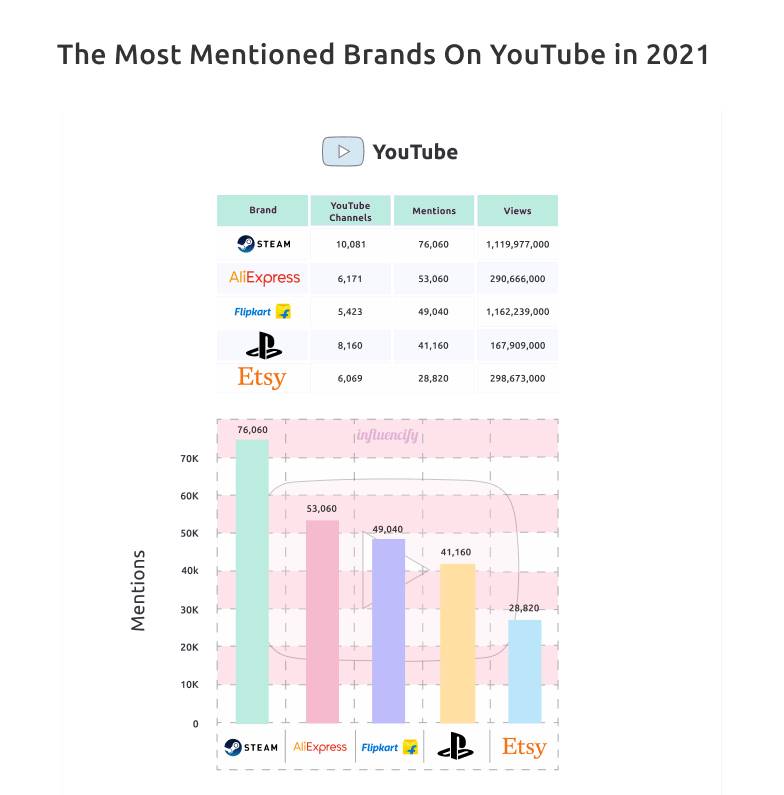 The evidence supporting influencer marketing as a key method of digital advertising is unstoppable. While traditional marketing methods fail to deliver, it’s more vital than ever that companies find more effective ways to communicate with their customers. The influencer marketing stats show that partnerships between creators pave the way for stronger relationship between brands and consumers.

Continue reading on 10 Influencer marketing stats that proves ROI in 2022 on the next post.